The following is a true story:

At 8:33a on April 25th 2014, Courtney Ann Stanford posted on Facebook: “The happy song makes me HAPPY!”  Friends and family also state she was posting selfies.

This would be Courtney’s last post, and last feeling she expressed.  At 8:34a, one minute after her last FB post, the 32-year-old crossed the median on Business 85 in High Point, NC. She drove head-on into oncoming traffic and collided with a truck. Courtney did not survive the accident. Sadly, her story ended in a human life taken so early because of distracted driving. Courtney’s story is more common than it should be. 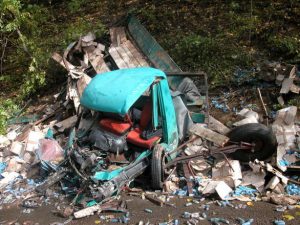 Unlike Courtney’s story, where she was the only injured party in the collision, many other stories that involve distracted driving result in third party injuries or loss of life.

Consider, in 2011 one such event is the fatal crash in which Michael A. Fiddle, a teenage driver, distractedly used his cell phone while driving. Michael’s actions killed his 19-year-old passenger, Evan Lieberman. This tragedy led Evan’s father, Ben Lieberman, to launch a campaign against distracted drivers; and in March 2016, by a vote of 16-to-2, the New York Senate’s Transportation committee has approved “Evan’s law” – a bill in honor of Evan Lieberman. Should Evan’s Law pass in New York, it would be the first state of the union to pass such a law.

If this proposed bill became a law, how would it affect drivers involved in an accident?  Currently, a warrant is needed for an officer to gain access to cell phone records.  Under the proposed bill, when there is an accident involving serious bodily injury, the drivers will be asked to hand over their cell phones. The driver has the option to refuse, but doing so will result in consequence or legal repercussions that may include loss of driving privileges or fines. Should the driver comply with the officer’s request, the cell phone would be connected to a hand-held device. The hand-held device would be able to tell if and when a cell phone was in use, by accessing the phone log; but, it would not gather private phone information like text message contents, images, phone numbers or the like. This device is referred to as the “Texalyzer” and its process has been described as a breathalyzer for cell phones. The Texalyzer ventures into cell phone forensics since its Isreali manufacturer, Cellebrite, specializes in mobile forensics.

The problem of distracted driving cannot be ignored. Statistics give empirical evidence that traffic accidents have spiked significantly in the last two years.  In fact, a November 2016 New York Times article plainly blames the use of electronic apps for the spike in traffic deaths.[1] The proposed Texalyzer would be able to pinpoint or diagnose the use of an electronic device as the probable cause of the accident, or at the least it being a contributing factor or variable. Another suggested benefit is that insurance companies may be able to use this technology to help settle claims faster.

Yet, as beneficial as this proposed bill is, it raises legal questions and issues. For example, opponents of the bill raise the questions of invasion of privacy and a violation of a driver’s Fourth Amendment rights. Other foreseeable conflicts are how the device will differentiate a legally permissible use of a cell phone, such as hands-free phone calls, from illegal uses.

The Textalyzer is also likely to increase the number of traffic tickets police officers issue after an accident for using a cell phone or electronic device violation [New York Traffic Vehicle and Law sections 1225-c and 1225-d (VTL §§ 1225-c, 1225-d)]. The current law does not permit an officer to issue a ticket for a petty offense, including a traffic ticket, when the offense was not committed in his presence.

We at The Claro Law Firm would like to remind all fellow drivers that no Snap, selfie, Instagram or FB post is worth your life or wellbeing of another person.  Please, drive safe.

If you have been issued a traffic ticket contact The Claro Law Firm today at 917-300-3334 or online at www.lawredress.com. For more information on when a police officer can issue a traffic ticket, visit our Can A Police Officer Write A Ticket If He Did Not See The Incident? blog. The Claro Law Firm has the best traffic ticket lawyer and is located in White Plains. We service Westchester County cities, towns and villages including but not limited to Yonkers, Harrison and Greenburgh.