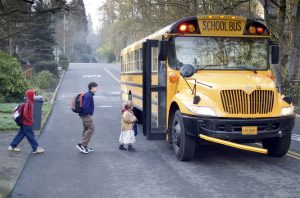 Passing A Stopped School Bus in New York, also known as New York Vehicle and Traffic Law section 1174 (“VTL § 1174”), is one of the more serious violations a driver can be accused of and it can have hefty consequences if not handled correctly.

The elements to this violation are found in VTL §§ 375(20) and 1174 and must be proven by the People before a driver be convicted of this violation.

Passing A Stopped School Bus is among the more serious VTL violations because of its potential consequences. No only does this violation assess 5 points to the driving history of a New York State motorist who is convicted, but the fines are hefty. Depending on the number of previous Passing A Stopped School Bus convictions a motorist has, the fine assessed by a judge can range from $250 to $1,000. Or, at the Judge’s discretion, he or she may sentence the driver to imprisonment as part of the sentence. Imprisonment can range from up to 30 days to 180 days. Additionally, a driver may possibly face a license suspension. Conviction of VTL § 1174 can also trigger an automobile insurance increase that can cost thousands of dollars over a period of years. If that is not enough, the DMV can assess a fine to a driver which starts at $300.00. To sum up, being convicted of, or pleading guilty to Passing A Stopped School Bus can mean huge fines assessed by the court, possible imprisonment, thousands of dollars in automobile insurance increases, license suspension and a DMV assessment.

A recitation of the potential consequences begs the question “Why are the penalties for violating VTL§ 1174 so severe?” The answer is simple: “Because children’s lives are at stake.” Children have been hit and seriously injured, or worse, by drivers who fail to stop for school buses. For example, a student was struck by a hit and run driver who illegally passed the student’s school bus. The child sustained serious injuries and spent months recovering from his injuries. On another day, a car illegally passed a school bus drove close enough to the bus to rip off the extended stop sign. These experiences were lamented in an Open Letter to Drivers that went out to parents in Bay Shore, New York at the beginning of the 2016 school year.

In general, courts are getting tougher on VTL § 1174. In fact, some New York State Courts, including those in Westchester County, have a no plea bargain policy for this violation. As stated in in the Open Letter to Drivers, due to serious nature of the violation and the real potential for loss of life, there is current movement urging “legislators to increase the penalties for passing stopped school buses” and “permit cameras to be placed on buses.” Allowing cameras to be placed on school buses to capture footage of motorist passing a stopped school bus can translate to less “Not Guilty” verdicts at VTL § 1174 trials.

With so much involved in Passing A Stopped School Bus, it is better to avoid the violation altogether. As stated in the letter to Bay Shore parents, “Remember: Passing a stopped school bus is more than just illegal; it is …a reckless act that puts our children in danger.”

Have you received a ticket for Passing A Stopped School Bus in New York? Give us a call at (917) 300-3334! We would love to chat with you and tell you exactly how we can help.