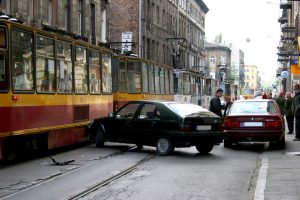 It happens more often than you think. If it has not happened to you, you probably know someone who it has happened to:

Monique works in Hastings-on-the-Hudson, New York. After a long day at work, she is driving home to Mt. Vernon, NY. Monique is a good driver and has never received a traffic ticket. Driving south on the Saw Mill River Parkway, Monique quickly checks her rearview mirror. Her eyes dart back to the parkway just in time to see the Honda Civic in front of her at a dead stop. Unable to stop in time, she barrels into the rear of the Honda with a deafening “BANG!” After the initial shock of the collision she looks for the other driver and his passengers. Thankfully neither she nor the driver or passengers in the Honda are seriously injured. The Yonkers police are called and the officer issues Monique a traffic ticket for following too closely (VTL § 1129-a). Not fair! The officer was not there when the accident happened. Can he issue Monique a ticket for a traffic infraction he did not witness?

These are excellent questions and why you should consult a knowledgeable traffic ticket lawyer if you received a traffic violation from a police officer who did not witness the alleged incident. At The Claro Law Firm, we will fight your ticket and fill you in on your rights, which can be the difference of having your ticket dismissed or accruing points to your driving history. The traffic ticket attorneys at The Claro Law Firm know what law firms who do not concentrate in traffic law do not know: a police officer cannot write a motorist a traffic ticket for a violation that was committed outside his presence. The law says that in order for an officer to have authority to issue a motorist a traffic ticket, the violation must have been committed in the officer’s presence. Even so, police officers often write tickets for following too closely or for an unsafe lane change (VTL § 1128-a) after they are called to the scene of an accident. However, if the offense you are charge with was not committed in the police officer’s presence, this can be a basis for having your traffic ticket dismissed. The questions, however, remains: “Is this the best way to handle my ticket?”

Let The Claro Law Firm help determine whether or not your case requires a motion to dismiss or whether a plea agreement is the best way to resolve your case. At The Claro Law Firm the best traffic ticket lawyers can discuss this with you during a free traffic consultation. Call us today at 917-300-3334 or visit us online at www.lawredress.com to talk to a knowledgeable traffic ticket attorney to receive all the information you need to make an educated decision on how to move forward with your traffic ticket.